The government’s political leadership style is distinct from previous governments. Relations with Congress were tense for most of the first two zears of government. While the predecessor governments relied on fixed majorities according to the model of coalition presidentialism, the current government repeatedly goes toe-totoe with Congress. 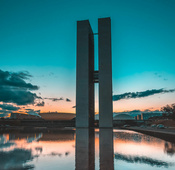 © Fabricio Rezende - Imported by the Archive Team [CC BY 3.0], via Wikimedia Commons